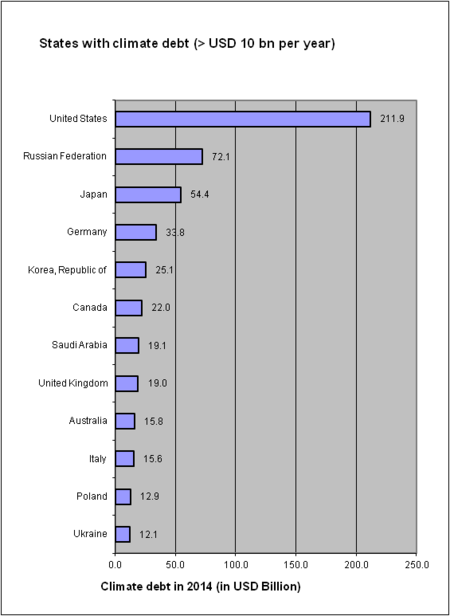 The issue of worldwide climate injustice has been high on the agenda of the global climate movement for several years. This injustice stems from the fact that many countries of the Global South are suffering the worst effects of anthropogenic climate change even though they themselves played a very small role in creating it.

The industrialised countries of the Global North, however, who have contributed excessively high CO2 emissions, are far less affected by the negative consequences of climate change.

Although the concept of global climate justice has been mentioned frequently in the past, these statements have often been little more than empty words. Practical solutions, such as how to go about setting up relevant and tangible compensation measures in line with the principle of global climate justice, are hardly ever discussed. But as long as this issue remains nothing more than a general demand, no action will ever be taken. That is why it is ethically imperative for the worldwide climate movement to demand the acknowledgement and payment of tangible, calculated and transparent climate debts as a means of financial compensation between the Global North and the Global South.

Based on CO2 emissions data up to 2014 and UN population data taken from 2010, this document presents accurate calculations of the current climate debts of some of the biggest climate debtor countries. The straightforward and transparent calculation method used here was presented in the transform! Journal vol. 07/2010. It is based on a global CO2 budget approach published by the German Advisory Council on Global Change in 2009.

For the sake of simplicity, the overall approach will initially only focus on dominant CO2 emissions. An appropriate strategy can be established for other greenhouse gases at a later date.

As can be seen from the following diagram, the analysed countries are already generating astonishingly high annual climate debts even though no historical CO2 emission data (i.e. from the beginning of the industrial era) was used for this budget approach; only CO2 emissions since 1990 were taken into consideration. The reasoning behind this strategy is based on the fact that anthropogenic climate change was only considered scientific fact and globally accepted in 1990 when the IPCC released its first report. Furthermore, one tonne of CO2 emitted was only valued at USD 40. The fact that this still results in such high climate debts per year underlines how urgently this strategy is needed. Taking this approach would also objectify and substantiate the arguments of the climate justice cause. (The cumulated climate debts to 2013 are even not considered).

This diagram lists only the top twelve climate debtor countries. There are an additional 20 smaller nations (mainly OECD countries) that have already racked up climate debt. Added together, this money could be put into an annual UN climate fund worth approx. USD 570 bn. This fund could then be used to finance appropriate climate protection measures and programmes of climate change adaptation in the countries of the Global South. Tight controls and possible sanctions need to be built into the overall mechanism from the very start.

By the same token, China and India currently have no climate debts as, in accordance with the justice principle, their high populations entitle them to high CO2 credit. However, China is expected to run out of so-called ‘climate credit’ within the next 10 years if its CO2 emissions remain as high as at present.

The fact that the acknowledgement and payment of tangible climate debts currently seems politically impossible and idealist in the face of the prevailing capitalist balance of power does not mean that a progressive and internationalist climate movement should be duped into abandoning such an overwhelmingly convincing demand. At the same time, this call for reparations should not be seen as a substitute for the many other important and crucial demands that the climate movement is fighting for (e.g. the call for radical decarbonisation schemes; for a comprehensive restructuring of energy and transport systems; for a radical rethink of industrialised agriculture, including the incorporation of agroecological principles; for an end to the disastrous clearing of virgin forest and for large-scale reforestation).

The global climate movement should promote this budget approach (using greenhouse gas emissions that are still just within the 2°C target) and the resulting transparent and easily calculable climate debts more heavily worldwide (related to this: „Der Klimagipfel in Lima erreichte nur einen schwachen Minimalkompromiss„, „Klima-Sondergipfel in der UNO, New York und weltweit größte Mobilisierungswelle gegen den Klimawandel“, „‚Durchbruch für den Klimaschutz‘ beim G7-Gipfel in Elmau kaum mehr als Schall und Rauch„). The goal must be to work together with others (e.g. the G77 group of nations) to increase the pressure on, in particular, industrialised nations to such a degree that, based on the reality of these facts and despite all conceivable protests, countries with climate debts have no other option but to pay adequate compensation on the scale outlined here to countries in the Global South.

Translation: Veronika Peterseil, This article was first published at transform-network.net.